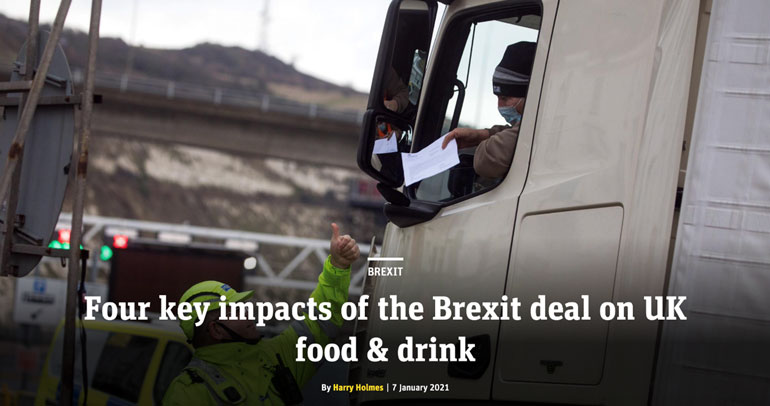 The trade deal dodges punishing tariffs, but there are plenty of changes for the UK food industry to adapt to, despite little notice

It went down to the wire, but a UK-EU trade agreement is finally in place. The impacts will touch almost every corner of the food industry, yet the deal’s full implications will not be understood for months, if not years.

Perhaps most vitally, the deal avoids punishing tariffs that could have pushed average food prices up 5%, according to Tesco chairman John Allan. Given the majority of the UK’s food imports come from the EU, BRC CEO Helen Dickinson says the deal should allow British households to breathe “a collective sigh of relief”.

Many of the other changes, however, involve considerable complexity, and the food industry has gone into overdrive as it looks to understand and adapt. Of concern to many is the lack of an implementation period – besides those previously announced on UK imports – meaning businesses had about a week to read and understand the deal before it came into force. With it now up and running, here are four of the key impacts on the food industry.

The deal may be branded as ‘zero-tariff, zero-quota’, but for many manufactured products it’s not that simple. Businesses must prove they qualify for tariff-free access by meeting the ‘rules of origin’ requirements for each product. These are set out in the deal and specify the exact proportion of a manufactured product that must be produced ‘locally’ to benefit from a preferential tariff rate.

The EU rejected UK requests for inputs sourced from countries with which the UK and the EU both have a free trade agreement to count as ‘local’, meaning those who source ingredients from the likes of Japan or Canada will be particularly affected.

“The rules of origin has quite a few areas we think are challenging and they’re going to have serious implications for supply chains where they either need to be changed, or where it’s not going to work in future,” says Dominic Goudie, head of international trade at the FDF.

Goudie says there are already some “unforeseen consequences” because of the rules of origin. EU finished goods, for example, are arriving at UK distribution centres to be re-exported to Ireland or other European markets. However, without further processing, these products do not count as originating in the UK and so do not qualify for tariff-free access to the EU.

The UK and the EU did not agree any means to reduce the burden of sanitary and phytosanitary (SPS) checks for food of animal or plant origin crossing the border, with the deal going little beyond the most basic trade terms set out by the World Trade Organization, says Anton Spisak, policy lead at the Tony Blair Institute.

It means businesses exporting goods such as meat and dairy into the EU will have to undergo “the full burden of requirements” in order to prove compliance with both UK and EU regulatory regimes, says Peter Hardwick, trade policy advisor at the BMPA. This will include extensive paperwork requirements as well as physical inspections at the border for up to 30% of loads.

The EU has eased its inspection requirements with numerous other trading partners such as New Zealand, for which only 1% of goods are subjected to SPS checks upon arrival. The UK, however, did not acquire such allowances.

“The fact that you have audits and inspections still being carried out means that you’re not trusting the other side to be doing what it says it’s doing,” explains Emily Rees, senior fellow at the European Centre for International Political Economy.

The checks are the result of the UK and the EU now inhabiting separate regulatory orbits, though the full consequences of this will only become clear once the regimes start to diverge. Given any divergence will come at a cost to business, Rees argues the UK government must be sure of the competitive impact of any change to its regulatory system.

The deal could also allow for EU inspections of British processing plants, something that could become ever more likely as regulatory divergence occurs, says Rees. A number of EU regulations apply to processing methods even if made outside the single market, covering production standards such as veterinary drugs, animal welfare, and slaughter methods.

“If you want to export to the EU market, the EU wants to check that you’re abiding by its regulation in these areas. And you can’t necessarily just see that on the basis of a customs check on the final product. So that’s where the question of the audits in establishments becomes important.”

There is good news in that hauliers can continue to operate between the UK and EU much as they do now. Despite concerns that drivers would be forced to apply for a limited number of permits to enter the EU, this has not come to pass and there are no limits on the number of British drivers that can enter the EU or vice versa.

The only thing that has become limited is the number of trips UK and EU hauliers can make once abroad. While UK drivers, for example, used to be able to make three additional trips within a country after dropping off a load, now only two additional journeys can be made within the EU and only one within the same country, explains Sarah Laouadi, European policy manager at Logistics UK. The same goes for EU drivers in Great Britain.

Shane Brennan, CEO at the Cold Chain Federation, believes the change could have an impact on transport capacity within the UK. “We have become quite reliant on a certain percentage of movements inland in the UK being done by EU hauliers,” he says, though much could depend on the efforts of the UK government to enforce the new restrictions.

Now Britain is a “third country”, exporters must start using heat-treated wooden pallets when sending goods to the EU, intended to prevent contamination and the spread of pests.The change is not just an additional cost burden, but could lead to some troublesome logistical difficulties. A shortage is already foreseen, given the huge upsurge in demand, while it is thought the pallets that do exist could end up in the wrong place. For example, pallets are required for goods moving from Great Britain to Northern Ireland but not in the opposite direction, meaning a pile-up could quickly occur along the Irish coast.

It is one of many immediate issues for which businesses hope a resolution can quickly be found. But the complexities of change to the UK’s trading relationship with the EU means many more could be coming down the line.“We need to start thinking of the result of the deal in three phases,” says FDF CEO Ian Wright.

“The immediate phase is borders and disruption. In the medium term, it’s coming to grips with the serious and far-reaching consequences of the relative hard Brexit on rules of origin. And in the long-term, it’s the prospect of institutionalised regulatory divergence both between the UK and EU and within the UK.”